With a sizeable population and spread over a large area, the town of Kerch bears little resemblance to other Crimean places. That said it does offer good touring possibilities for those with cars, as you can easily reach four major marine areas, namely the Black Sea, the Kerch Strait, the Sea of Azov, and the Sivash, plus some dozen of so lakes with supposedly curative waters. Each has its own salinity and temperature levels, and, more importantly, its own special collections of fish.
People come here primarily to visit friends and relatives, hence there is no visible difference between the tourists and the locals. Numerous archaeologists work happily in the area (if you can call working with a pick and a shovel in the hot sun bliss). Up to twenty expeditions can be present here during the season, some with diving equipment in search of sunken treasures.

Some 26 centuries ago the antique Bosphoran Kingdom was a large and strong state. Its treasures are exhibited today in the Hermitage and the British Museum. Despite this, Kerch and its neighborhoods have little to offer tourists, just a small exhibit showing the King’s burial mound, the crypt of the ancient Greece goddess Demeter (showing some unique frescos), a portion of the archaeological dig on Mount Mithridates, where the capital Pantikapeus was situated, and other digs of subordinate cities like Tiritaka, Nimpheus, and lluratum. The small local history museum gives some idea of what this place was like in the past, but dozens of archaeological objects remain out of sight of the public. That said, the number of tourist sights increase from year to year. 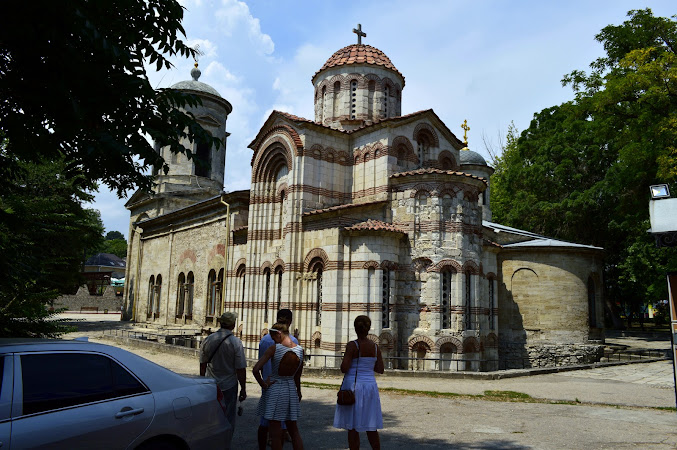 The church in the city centre is in excellent condition. The Temple of John the Baptist was built in the 8th century and it is one of the most ancient temples in the whole of Eastern Europe. In fact, Christianity came to the Crimea immediately after the temple had been constructed. It is highly probable, that the Apostle Andrew the First Summoned, visited this land during his travels through the Caucasus and Scythia. Some of the people who listened to Jesus from Nazareth are said to have come here too.

The Eni-Kaleh Fortress (the name means “a new fortress») was build by the Turks on the coast of the Kerch Strait, at its narrowest point. The construction of the fortress progressed rather slowly and was only completed in 1703. French engineers supervised the work.
The dramatic pages of the history of the Great Patriotic War (WWII) are displayed in the museum of the defence of the Ajimushkai Quarries, the Arts Museum, and the Museum of the Eltigen Landing Operation.
According to both Homer and other authors of antiquity, Achilles, the hero of the Trojan War, was born on the coast of the Cimmerian Bosphorus (the Kerch Strait). In his honour, local fans of ancient valour hold the Achilles Games. The main mountain that towers over Kerch gained its name from the Pontic King Mitridates VI the Eupator (132 — 63 BC) who owned the lands on both coasts of the Black Sea and who clashed with the Roman Empire. On this mountain, surrounded by enemies, he met his end. The Roman historian Cicerone, after learning about Mitridates’ fate, deemed him “0“the greatest of the rulers with whom Rome had ever been at war”. 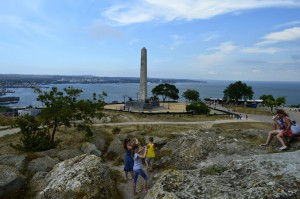 Following the seizure in 1475 of all the Genoan colonies, the Turks permitted those who came from Italy to live in villages on the Kerch peninsula. Before the Soviet era, the Genoese communities here had been numerous, and kept their links with their parent state. They exchanged many of their young people for trade or naval education. Stalin’s regime deemed them as colonizers, and persecuted them. There are some dozen or so of their deserted villages in various parts of the peninsula, and some interesting ruins remain. Italian tourists visit the cemeteries to see the graves of their ancestors.

Cape Kazantip, reaching northwards far out into the Sea of Azov, is an exceptionally interesting place. The Kerch landscapes are not the same as those on the southern coast, there are no bright colours and lush floral tints, but the land forms contain some amazing and bizarre rock formations. If you look closely you will discover new features in this wild, deserted, and somewhat out of this world landscape.
A decision had been made by the authorities to build a nuclear power plant on Cape Kazantip, on the coast of the salty lake Aktash. The construction was stopped by the energetic efforts of the Crimean environmentalists, who even resorted to hunger strikes to make their case. The town of Shcholkino is named in honour of the academician Kirill Ivanovich Shcholkin (1911 -1968), who studied at Simferopol University, and later became the father of the soviet nuclear bomb and, naturally, also of atomic power.